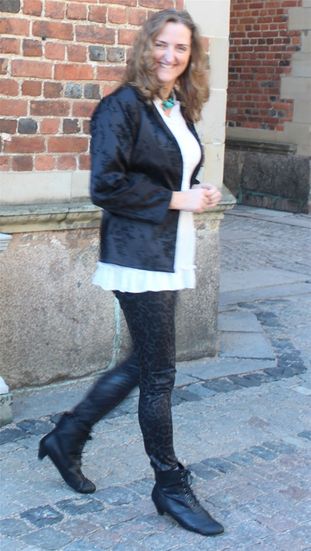 ”Wuuuav, it´s great!.... Originally, it was also king Christian 4's intension with the Great Hall at Frederiksborg Castle, that it should impress the visitors, and while I sat and waited for the distribution of Brewer Jacobsen's Portrait Award at the opening of the exhibition "Portrait NOW! 2013 ', I had to admit that the deceased monarch succeeded in doing it once again here several hundred years after his death. It is SO beautiful!

The main prices of Portrait NOW 2013, which was awarded during a grand ceremony in the Great Hall at Frederiksborg Castle on 3 May 15-17 k with, among other speeches and opera singing. 1 prize went to James Hauge (Englishman living in Denmark), 2. Price: Anastasia Kuznetsova-Ruf (Russia) and 3rd place went to the Finn Ville Lopponen, 3 beautiful and touching portraits. Congratulations to you all!. The exhibition "Portrait NOW 2013 ''s 81 portraits is a great testimony of the times we´re living in. Among other things, it tells a lot about Nordic standard of living versus Russian living standards and provides a powerful insight into the emotional life of the ongoing world crisis. They all tell a silent story of a human being.

It was an extremely beautiful day at the castle. The time ran away from us in the red room of the princess wing, where "Get OUT" hangs. Every time we would leave it to go to the opening reception, there was some interested audiences, that we fell into conversation with, they asked us questions about the portrait, would say hello to both of us, hear the story of the portrait , wished to photograph both of us or be photographed with one of us or both of us, or have one of our cards with Bent´s info on one side and mine on the reverse.  That went on for about 2 hours, and time goes like the wind when you are in good company and distracted, so unfortunately we came too late for the opening reception withsnacks and small wineglasses with the other selected artists, the museum direction and the jury. Whoops!

I´ve always been interested in architecture and history , so it is wonderful to be an artist, craftswoman and film statis / short film actor, ´cause it provides some opportunities for unique experiences some historical places that are not normally accessible to the public, and if you participate in historical films as I have done a few times now, it's like travelling back in a time mashine and being there yourself. Like Sensing the presence of history. Very exciting.

Right now you'll at Frederiksborg Castle also find a Søren Kierkegaard exhibition on the occasion of his 200th birthday on May 5th. After you´ve visited "Portrait NOW! 2013" and seen the Kierkegaard exhibition at Frederiksborg Slot, you should go to Assistants Cemetery (Assistens Kirkegård) in Copenhagen, where on the 5th May there is a premiere of one big film artwork, namely 25 QR-coded short films directed by Trine Damgaard Kristensen, displayed permanently at 25 VIP-graves. One of them is the burial plot of Soren Kierkegaard.

If you don´t realize on beforehand, it´s almost impossible to see that the contemporary jeans dressed woman on Bent Voldby's photo portrait "Get OUT!" which is on display in the Princess wing at Frederiksborg Castle in portrait NOW! throughout the summer of 2013, in fact, is exactly the same person (ME!) as the grieving, crying, anxious embossed, shaking, freezing pale woman dressed in a black funeral crinoline anno 1850s, who react very emotionally to the physician Henrik Lunds scandalous speech at Soren Kierkegaards funeral in November 1855 in Trine Damgaard Kristensens short film about his life, which is permanently displayed QR coded at his grave in Assistants Cemetery.

But nonetheless, till now it will be the two places in Denmark you can find me and my artistic universe this summer, and it is done in cooperation with other Danish artists.