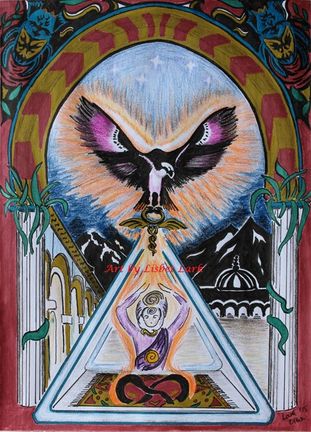 "The yearning for eternal life and rebirth has existed as long as human beings. Why? Because we can´t handle the suspence about what happen to us when we die. The fact that the only thing about our destiny which is sure, when we´ve been given birth, is,  that we will die some day, creates a life long fear . We don´t know when, where or how. We just know, that it will happen. In order to control the anxiety created by this fact, people have since ancient times used the orientally symbols and rituals for rebirth and eternal life as tools to get peace in mind about this inevitable consequence of life.  “Pyra” means fire.” Mide” means middle. “Pyramide” means “fire in the middle”,   by some people used for describing the energy inside a pyramid, which should come out through the top in a laterally reversed energy field capturing and dragging everything which comes in it. The attracted rebirth symbol, the landing / rising Poenix , an old fabulous monster in the Roman, Greek and Egyptian cultures, which according to the  legend lands in its nest, burns up and then rises from its own ashes. The name “Phoenix” comes from Greece and means “purple”. In my illustration it creates an opposite directed energy, going through the top of the pyramid , and down into the meditating human being, in whom the 2 kinds of strong power / energy meet, unite  and give immunity and peace in mind through activating chakras in the body.  By opening the energy zones in the body, these chakras, trust, will, vitality, empathy, the inner strength and connection to the universal unconsciousness will be opened, and feelings of despair will be redused. Connecting with the infinity consciousness leeding you to a deeper mentally, intellectual ly and spiritually understanding.

I´ve used an infinity symbol at the floor  of the pyramid as both the bottom of a Lotus Position for the  meditating human being and as a burning nest for the landing Poenix as a symbol of the boundlessness and endlessness of life, like a snake hunting its own tail. On the gate are turquoise Scarabs, a beetle , which is being worshipped as a holy animal from Egypt to Greece and the Etruscans, a symbol of eternal life, because its  life style has been interpreted as symbol of the creation of the world and as re-creation, as self-procreation , and thereby a resurrection symbol. You need a key to use this gate´s keyhole , the rebirth chanal in the top of the pyramid, an interface between this life and the next one. I´ve decided to use another symbol of eternity, the Egyptian Ankh cross, which means “key” and “life” and therefore also is called “The key of life”.

Actually, I don´t consider myself to be a very spirituel person, and I also had some challenges here, needed to research a lot on the theme and symbols. But in the "right" surroundings, one can be inspired for almost everything also meeting this challenge:

"Express The acttraction of the orient on people in the Western Countries" = Theme for exhibition.

To be honest, I found it was an advantage to be an earlier abstract painter, like me, who in 2015 have developed 7 new naturalistic illustration lines. Because a difficult abstract theme like this, certainly takes an extended unlimited abstract thinking and expression.

Artworks "Eternal Life" and "Lotus Genie" are both started on my museum exhibition trip to Museo Archeologico di Olbia, Sardinia, Italy this summer debuting as an old ancient history illustrator. Therefore, Place of origin is "Olbia," for these 2 artworks..... - Small, but VERY good stack of drawings I brought with me back home from my recidense in the summer heat of the ancient city. They´re no 2 and 3 of my artworks with place of origin "Olbia," which now are or have been out on recognizing exhibitions.

Anyway, Christmas is coming up very soon, so I want to wish all of my blog readers who celebrates that, a merry Christmas. My exhibition "H. C. Andersen Passion1" at the Woven Heart Art Museum, DK (Julehjertemuseet) has been extended, now including the weekend Dec 19th and Dec 20th, too

Thank you all for following me and reading this my long blog.