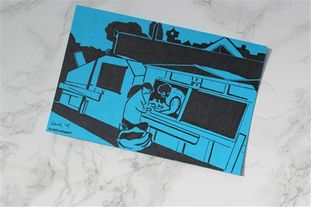 Whooops, I have done it again!

Got a few museum exhibitions coming in a swarm and I haven´t even heard from all juries and museums yet....

Let´s start with the first one, which have fernissage April 28th 2016 at the Goriska Museum at Castle Kromberk in Slovenia:

Theme of exhibition: " Garbage handling in Europe is a growing problem."

My 3 miniature artworks, "Recycling At Town Specialists 1-3. " are inspired by watching East European Garbage Collectors invading containers in Copenhagen and leaving a pigsty around themselves.

Scandinavian people are used to sort out their garbage for recycling and clean up after themselves, but what does it help, when these people are throwing it around, and leaving a mess and dirty environment around our containers?  I talked to some of them and they all told me that at home in their native countries, they had told their families, that they had found good jobs, where rich payed by and had got very good apartments by the Danish government just for being here. They are basicly living on a lie in order to save their faces towards their families and friends.

You know what? Actually, none of them had jobs, they all slept in the streets in down to 15 minus degress celsious in the winter and where living like this surviving by eating half-rotten out -of-date food in garbage and assaulting Danish homeless people. They had chosen this life themselves, and by lying about their situation at home they attracted more and more pigsty makers from their native countries.

So, no matter what you hear from relatives who has left home for "the Promised fairytale land", Denmark, this is the life, which is waiting for them and you, when you come here. I´m sorry to take all your illusions from you, but that´s the fact. As far as I know we had over 60.000 homeles people in Denmark, including young students who cannot get an apartment near the universities and other education places, old and sick people and other invisible poor Danish homeless people, BEFORE the culture invasion came last autumn, and this problem hasn´t been solved by that. This exhibition is 1/2 year delayed. After mailing artworks to Slovenia in July 2015, traffic of East European  Garbage Collectors has decreased gradually as the borders has been closed and everybody has to show a passport in order to cross the Danish / Swedish borders.

But the weakest ones of our own have payed and still pays the ultimate price for these people´s  behavior and the culture invasion, therefore I have made an alternative salary agreement with my models, which are Danish homeless people. They wouldn´t have any money themselves for being my models. Instead they wanted a link attached to their aid organisation each time these artworks, which I think are very good and relevant placed in the permanent collection of the Goriska Museum, Slovenia, are on show.

- and remember that landcode for Denmark is (+45) when you are phoning from outside Denmark.

This exhibition is also curated and arranged by volunteer people. I cannot say it enough: You are my heroes! Thank you so much for putting my artworks up at the museum and taking care of them!...............- and sorry, for being a little bit provocative and rude in this blog,....

The rest of my 3 artworks in the permanent art collection of The Regional Goriska Museum at Kromberk Castle in Slovenia, "Recycling At Town Specialists 1-3" are shown in the art galleri under Item "Illustration Line 2", Abandoned illustration Line on this web-site.